In chess, there is no opening which is as popular, complex and rich as the Sicilian Defence. Due to the endless amount of possibilities for both sides, a lot of players face difficulties when preparing this opening. According to the Russian Chess School, before starting to explore a given opening, we should first learn to handle the arising pawn structures. While lines and sub-lines change over time, pawn structures remain stable. I am convinced that this structural approach to the opening is the only possible way to study the Sicilian defence. In his first article, he examines one of the most popular Sicilian structures which occurs in variations where, at some point, Black plays the move e7-e5. More precisely, I focus on the structure arising from the exchange on "d5" where this square is occupied by a white pawn. Such pawn structure arises from a number of Sicilian variations. Najdorf, Boleslavsky, Scheveningen, Paulsen, and Sveshnikov are only a few of them. In order to explain our featured pawn structure, I provide you with a concrete example. 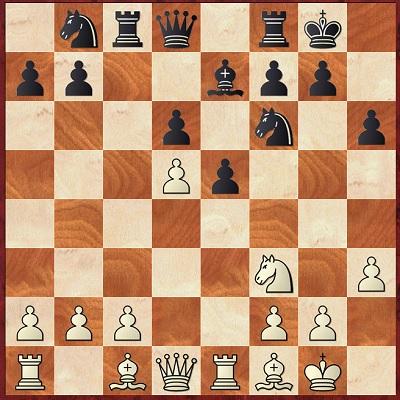 The position on the diagram arises from Boleslavsky Variation after the moves: 1.e4 c5 2.Nf3 d6 3.d4 cxd4 4.Nd4 Nf6 5.Nc3 Nc6 6.Be2 e5 7.Nf3 h6 8.0-0 Be7 9.Re1 0-0 10.h3 Be6 11.Bf1 Rc8 12.Nd5 Bd5 13.exd5 Nb8. Starting from this point, I am going to explain all the basic ideas and plans for both sides. Let's first take a look at White's strategy in such kind of structures. In order to make my explanations clearer, I would like to introduce two classical chess concepts. From a positional point of view, we should always play on the side where we have pawn majority or spatial advantage. It's important to mention that in practice the concepts of pawn majority and spatial advantage are closely interrelated. In most of the cases, the spatial advantage is defined by the pawn structure. Also, it's important to know that you must exchange pawns on the wing where your opponent has a pawn majority. If we take into consideration the above-mentioned principles, on the diagram position, White is supposed to further advance his queenside pawn majority. Maybe the reader is already asking himself the following question: What is exactly the point of pushing the queenside pawns? This question is best answered in the first half of 20th century by the great player and author Aaron Nimzowitsch. In his wonderful book "My System", he affirms that the advance of our pawn majority should be directed to the base of the opponent's pawn chain. In our concrete example, black pawn chain is formed by the pawns "d6" and "e5" ( d6-pawn being the base ). In this line of thoughts, we reach the conclusion that White should proceed with c2-c4, b2-b4 followed by c4-c5. In a case of dxc5, White has the chance to create a defended passed pawn by bxc5 followed by d5-d6. If Black sticks to the waiting policy, White can weaken the e5-pawn by means of cxd6 or create an advanced passer by playing c5-c6. Note that he is not always forced to take an immediate decision. Sometimes it's advisable to strengthen the pressure against "d6" by executing a manoeuvre like Nd2-c4. In practice, however, things never goes so easily. As we have already pointed out, one should go for pawn exchanges on the wing where the opponent has pawn majority. Following this strategy, Black is advised to place his queenside pawns on "b6" and "a5" squares. In this case, White is forced to waste a considerable amount of time in order to execute his plan. For instance, he will play a2-a3, b2-b4 and only then c4-c5. Nevertheless, after the pawn exchanges ( axb4 and bxc5 ), there will be no pawns left on the queenside. Additionally, in some cases, white central d5-pawn will become a weakness. In order to avoid this scenario, before starting to prepare the typical c4-c5 break, White is advised to gain some additional space on the queenside by means of a2-a4-a5. As you are going to see later, in a number of positions, the a5-pawn plays an important role in the queenside battle. In order to support the advance of his queenside pawns, White usually develops his pieces in the following way: Be3, Rc1 and possibly Nd2-b3. Note that all of these moves are designed to support the critical c4-c5 break. After getting acquainted with White's ideas in this structure, it's easier to figure out what works for Black in such positions. When looking at the position, we could immediately spot Black's pawn majority on the kingside. That's why his main strategy consists in launching an attack on the kingside. Just like White does on the opposite side, Black should make use of the dynamic potential of his pawns in order to gain space on the kingside. Normally he achieves it by executing the advance f7-f5 followed by e5-e4 ( in positions where his light-squared bishop is on the board, even f5-f4 is possible ). After playing e5-e4, Black tries to put a minor piece on e5 and transfer some major pieces to the kingside - moves like Qh4 and Rf6 are always in the air. On the diagram position, however, the above-mentioned plan hardly works, because after playing f7-f5 and e5-e4, Black weakens the e6-square ( White can make use of it by Nd4-e6). That's why, in this structure, Black should keep his light-squared bishop. On the other hand, he aims to exchange the dark-squared bishops. This idea could be explained by the fact that the e7-bishop is restricted by the pawn chain d6 - e5 while the e3 - bishop actively supports white pawn majority on the queenside.

Now, when we know all the typical ideas for both sides, it's time to look at some games. The first two games I am providing you with feature the application of White's strategy in practice. Later, I analyze my game against the legendary Ratmir Kholmov which illustrates how dangerous could be Black's counterplay.